Every man is made for son-ship but not every man receives the blessing of son-ship. The problem with this cultural epidemic is this: if men don’t get healthy approval from a father, they will chase it in a number of unhealthy and self-destructive ways that destroy the man and the people connected to him. In this powerful series titled “Father Factor,” pastor and men’s expert Kenny Luck is on a mission to break that cycle.

Why men do the things they do to get accepted and validated?  I want you to think about that.

I don’t care how far back you go, whether it’s elementary school, junior high or high school. I want you to think back about some of the things that you did to be accepted by your buddies, some of the crazy things, whether it was on a playground, at a social scene, or at work. 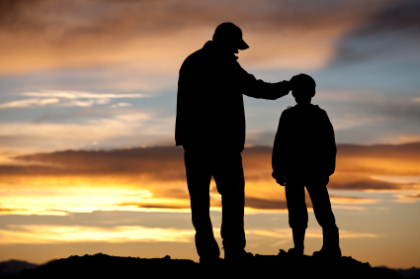 I did a number of things when I was growing up to get accepted and validated by guys. I wore a number of masks when I was with my jock friends, I grunted and hit them a lot.

When I was with my smart friends, I was the master of trivia. In the social scene, I was the master joke teller. I wore several masks to become who I needed to be in order to prove that I belonged, that I was accepted and approved.

These were the ‘BC’ days in my spiritual journey, BC meaning “Before Christ.” In my BC days, a group of friends and I were up at a house in the Santa Cruz Mountains. They were serving beverages in those standard issue red cups. I looked outside. It was extremely dark.

Have you ever noticed when you are in the woods, if there is a light on, there are usually moths gathering around the light?

I thought it would be a good idea to catch one of them, and, in front of my friends, begin consuming moths along with the beverage in the red cup. I remember catching my first moth. My friends are saying, “What are you going to do with that?” and then I proceeded to put it into my mouth and swallow the moth with the beverage in the red cup.  I proceeded to do that 29 more times and then I got all of my friends doing it. It’s like our corporate IQ went down to negative 50.

That’s just one small snippet of my journey. I’m thinking, why would anyone ever do that? Why would I do that?    I took risks socially that I wasn’t spiritually or morally comfortable with in order to get acceptance from my buddies.

You see, every man is born with a need for acceptance, affirmation, validation and approval. If you don’t get it through your Creator, via your family and your heavenly Father, you will get it from culture. Every man will either experience affirmation, acceptance, authority or accountability in his relationship from one or the other: Creator or culture.

Fathers form people. Men become men in the company of other men. That’s a sociological fact all over the globe, in every culture. Whatever is modeled, mentored or messaged, it is always multiplied with respect to boys, young men and fathers. It’s at work right now in you.

Let’s personalize the Father Factor. When I speak of the quest for son-ship, I’m talking about the quest for acceptance. When you win the quest of acceptance as a son, you win emotional stability and emotional maturity. You have a strong sense of yourself. You are free to be the man God created you to be verses being the man you think you ought to be in order to win the acceptance that is missing.

Why do we have to talk about this quest for son-ship?

All men must solve the acceptance issue, once and for all because if they don’t, they will chase it forever until they do.

All you have to do is look out there in our broken male culture to see men chasing acceptance in all the unhealthiest ways. They will take it in whatever form they can get it. Guys, we are spending $54 billion a year on fantasy, all of this just to be validated, to have control over something.

We will chase money, brands, images and cars — as if they will be a reflection of us. We swallow the myth that who we are is based on what we possess. Mercedes are engineered for quality. They are classy, and a successful brand. I drive one, therefore, I am too. It’s not the Mercedes. They are amazing vehicles, but what’s important is whether our attachment to the brand is healthy or unhealthy.

We could be chasing material power to be accepted. There is this cultural idea of the guy with the most wins and how he attracts the ladies. That’s another way men chase acceptance, and when they chase this one, they usually end up capturing other issues in their lives whether it’s unwed pregnancies or diseases or just the soul deadening of broken sexual relationships.

If we don’t accept this from God and/or don’t receive it in our family, we will do whatever it takes to attain the love and acceptance we need.

When you see it being worked out in an unhealthy way, it’s just a broken quest for son-ship, for Creator, for families that weren’t there, fathers who weren’t there. The Father Factor is in full-bloom.

What’s interesting to me is that you will never hear about this in the media — never.

For example, I’m looking at some of these shootings we’ve in the last couple of years. People say, “It’s a mental illness issue. It’s a gun issue.”  It is partially about those things, but that’s not the root.

I was listening to an expert who has written a book to profile the Columbine killers, Sandy Hook, Connecticut; Aurora, Colorado; and Eugene, Oregon. The number one common denominator was social acceptance.  I would go a step further even to say that the Father Factor had to be in play.

As I am watching all of these things unfold, I’m saying to myself: “Wow! What would happen if some of these guys – and they are all guys by the way – had experienced healthy acceptance, affirmation, authority, approval in some of those formative years to give them a sense of self that when the pressure was on, they would still feel OK because on the inside they had been formed properly by a loving father.

Watch The Father Factor Series where men’s expert and pastor Kenny Luck helps you learn that God loves you as His son.

A Cash Advance on Forgiveness? – The Fantasy Island Series III