But there’s another upset that tops ‘em all. Imagine facing a perennial No. 1 warrior, 9-foot tall monster of a man with a menacing reputation and master of psychological and physical warfare, covered head to toe in armor and carrying weapons with physical power never before seen by a man on earth?

We all love the Cinderella story. But when you’re facing a giant like this, courage alone can only get you to the battlefield. To win, you’ve got to have something extra. 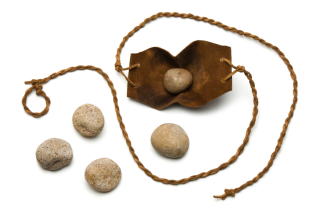 Ask David. He was a shepherd boy, taking care of sheep and serving his brothers snacks while they were on the front lines of battle. Hardly the makings of a warrior. He wore loose and light clothes, sandals, maybe had a shepherd’s staff, and a sling-shot. Although David was underestimated, his greatest assets were not external, visible or even quantifiable.

He had heart, passion, fearlessness, compassion — and God on his side.

When David heard Goliath defying the Israelite army and mocking God, it triggered a tsunami of emotions, energy, and holy inertia that no one could have predicted. The stage was set: A physical giant would take on a spiritual giant, which would be the most outlandish confrontation in history.

The fact is, we all face battles with insurmountable odds against us at times in our lives. Our faith, being one of them. We are designated by God to be strangers deployed in a foreign land that is, at its roots, openly hostile to our faith and seeks to tear it to pieces.  That may not be the way we want it, but that is the way it is.

How to Win Battles With Odds Stacked Against You

When you face a battle, whether it’s physical, emotional, relational, financial, mental or spiritual, here are ways to tips the scales in your favor and become a giant killer

This may sound like cheating, but that’s not the intent. The first step to winning a major battle is to be on the right team, God’s team. If you believe in God, follow His ways, fully surrender to Him and trust His will, then you have a ringer. With God on your side, all things are possible.

Now, what battle needs to be won? Pick one. Do you have an estranged relationship? Financial trouble? Secret sin? Major challenge? Be specific and decide to do battle. That’s what David did. He heard God being mocked and decided to do something about it.

Next, ask God for help. Like David, we have an intangible and mighty Spirit serving as our advocate and who can intervene on our behalf. It’s like a guarantee, even if the result doesn’t appear to be a “win,” with God and the Spirit on your side, the plan will surely work out. The Bible says every knee will bow at the name of Jesus.

With God on your side, the battle in front of you and the Spirit behind you, you can face your battle with confidence! Don’t walk. Run. Run to the battle with faith that God’s plan will prevail. And His plans are good ones — that’s a promise.

Now execute your plan. God has a way of making your weakness turn into strength. You may not know how or when the battle will be won, but it will. And, the world will be left to wonder, ‘how the heck did that happen?’ And you can answer, “I am with God and He is able.”

If you find yourself a little weak in the knees, repeat the following truths out loud to yourself when you have a Goliath in your life:

God has prepared me.

The Holy Spirit is in me.

Nothing can stop me.

Nothing can hurt me.

God is for me.

He will redeem me.”

Besides, everybody loves rooting for the underdog.