March 24, 2014 | Featured | Kenny Luck God’s Plans for Your Mistakes: When We Make Them, He Redeems Them

I think the greatest weakness God’s man can have is being unaware of weaknesses.  Let me ask you: What is the most expensive mistake you have ever made?

I’m not talking about losing a deal, buying a lemon at the auto dealer, or purchasing a home that started depreciating the day after you bought it. I am talking about mistakes that cost you in your relationships, took a toll on your physical and spiritual life, or exacted a price in your life that you’re still paying today. What comes to mind? 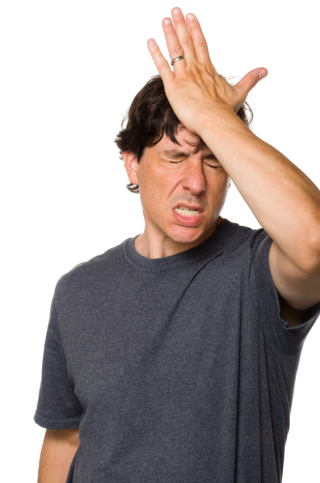 The next question is: What role has the consequences of this mistake played in your spiritual journey and service to the Lord?

Every Tuesday morning, my brother Chris teaches a Bible study for men on probation at a rehab center in Santa Cruz, California.  I called him the other  day to see how it was going and he told me about  a released felon who  told my brother (in different  words)  where  he could take this God  stuff and shove  it.

Big mistake, I thought, and not just because my brother can bench press over 300 pounds. My brother paused for a second and then tears mixed with love and righteous anger came flooding out of Chris’s mouth as he addressed this guy in front of the class.

”You think I’m some rich, white do-gooder here to tell you how to live? That I don’t know you? Tell me something, how’s your program worked for you so far?” Why are you here? Where have you just been? Twenty years ago I was you, sitting in that same chair, thinking and saying the exact same thing. I’ve seen your movie and the ending isn’t all that great. If you didn’t need to be here you wouldn’t be. So sit down, shut your mouth, and listen up or you’ll be out of this program so fast it’ll make your head spin. Don’t tell me I don’t know you. I am you!”

I smiled, remembering making the phone call to get Chris into that same program some twenty years ago. Today he’s a partner in the financial services industry using some of those great skills God had given him to learn business and finance from the ground up, making a lot of people  a lot of money.  He’s come  a long way from  where  he used to sit – in a court  ordered chair with a bunch  of other  guys who didn’t  want to be there. But Jesus needed him to be in that chair so that one day he could come back and have this colorful conversation with a new program member.

You won’t see Chris on TV. He is not a celebrity. But he is a hero – my kind of hero.  He shares his testimony with those men as freely as he shares the Bible or a cup of coffee with a man who feels the way Chris once felt – hopeless  and ashamed  of what he had become.

He’ll be the first to admit that he’s not a polished preacher but I have never seen anyone more effective with those men. It takes a special guy with a special story to crack the armor of these hardened hearts.

Most of them hang on every word.  Why? ‘Cause he’s been there.  He risks allowing God to use his pains, mistakes, failures, and losses in the past to serve other  people.  In fact, when you see him in action  you can’t  help but think that somehow those painful experiences  he had to go through  in the past were always a part of the plan.

God has lots of plans for our mistakes and weaknesses.  It’s counterintuitive to most men to think that way because our style is to hide them. So for a man to accept his failures, losses, and struggles as part of who is (i.e., reality) versus things to be hidden away and not

discussed  is a big leap of faith. It’s even more risky to allow God to use those same things to

serve other  people. Yet that is exactly what my brother did.

God’s plan is to use the very things we want to keep a secret or keep hidden.  In fact, one of the greatest things he wants to do is to bring us into the truth of reality to encourage  others who are struggling with our same issues. “He  comes alongside us when us when we go through  hard times, and before  you know it, he brings us alongside someone else who is going through  hard times so that we can be there for that person  just as God  is there  for us” (2 Corinthians 1:4, MSG). So maybe instead  of minimizing  or trying to forget  your struggles, failures, losses, temptations, or mistakes,  let God  use them! Instead of praying and asking God to take away your problems or past, ask God to do something with it.

Your pain has a purpose – to touch another man who has that same pain.