This is the second of four articles in our “Uprising –Series III,” where God’s men explore the “uprising” taking place globally where a rebellion is taking place against the suffering created by broken masculinity. This series takes us on a journey into our broken male culture, showing us that God is our Father and He wants us to return home to His family. This series will help you understand that we are all God’s children and — like any loving Father — He expects His sons to behave accordingly.

Isaiah 5:7 says, “The vineyard of the Lord Almighty is the house of Israel, and the men of Judah are the garden of His delight. And He looked for justice, but saw bloodshed for righteousness, but heard cries for distress.” 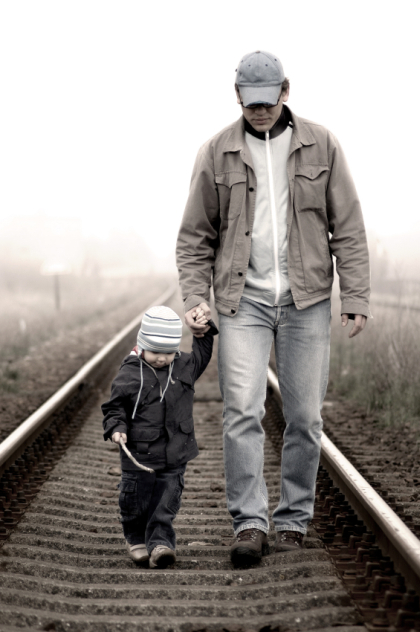 What we see is a Father tracking his sons to see if His character is being reproduced by in them. We see this idea of God’s character: a just God, a compassionate God, a merciful God, a loving God, a delivering God, and how he wants those parts of Himself passed into your character, and then moved out from you into a waiting world.

When He goes for an assessment in Isaiah, what He sees in the men of Judah, in His boys, is not this reproduction of justice and compassion and health and life.  He sees suffering under His boys, who instead of adopting His character, have adopted culture’s character: self-protection, self-importance, self-preservation, and self-indulgence.

It’s distressing to God because they are the “garden of His delight.” They’re His trophies.

Doesn’t your son or daughter, when they represent the best in you, reflect back on you? They are your trophy. “That’s my boy!”  I don’t know about you, my heart swells when I see my son and daughters.

Well that’s not what was happening here in Isaiah 5:7.

What we need to see here is that God is tracking His sons. He is looking for justice to come through us to the people around us.

Now justice comes to us in many forms. It comes in compassion, for people who need a champion for deliverance, who need to be set free. It could be your wife, who needs to be set free from the angry man that you’ve become or the one that highlights her flaws, and says stuff, and is resentful.

Maybe she needs to be set free from the you that is seeping out from culture?

Maybe your kids need to be set free from that controlling Dad, who because things are out-of-hand out for him at work or at home or just in life overall, has become demanding and distant?

Maybe, it’s outside of your home? Maybe it’s your neighbor, who is suffering from an addiction and needs to be freed from it?  Maybe it’s the homeless in your community?

Maybe it’s the sexually trafficked in your community? That’s happening right here in my hometown of Orange County.

You must have seen the news from Cleveland about Georgina “Gina” DeJesus, Amanda Berry and Michelle Knight who for over a decade were enslaved only seven blocks from Gina’s aunt’s home.

Maybe there is a cause where people are suffering and hurting, and they need deliverance and someone to bring justice?

In Micah 6:8, we see God’s heart toward you and me, “He has shown you, O man, what is good. And what does the Lord require of you? To act justly and to love mercy and to walk humbly with your God.”

I want you to see God’s mind about you as His son.

Do you know what I say to my son all the time? I say: “You’re a Luck. Lucks love God and love people. Lucks help people. Lucks serve people. There’s this connection. There’s this thing about being a Luck. We love God, and we love people. What does that mean? Wherever we go, we make choices built around those two convictions, wherever we are, it’s portable, it goes with us wherever we go. If you’re a Luck, you’re walking around with two convictions. I’m going to love God wherever I am, and I’m going to love people. Whatever manifestation that takes.”

I got that from God. He says: “I’ve shown you, O man, what is good and what the Lord requires of you.”

God is just and He wants justice. He wants deliverance for people who are beaten down. He wants compassion for those who have lost their dignity or lost their way. He wants us to walk humbly with Him, to do justly, and to love mercy.

God could do this all by Himself, but He has decided to involve us, His boys.  I say “His boys” not because I’m chauvinist or sexist, but because that’s what the Bible teaches.

Deuteronomy 10 is kind of like a Tomahawk missile for spiritual motivation. You’ve heard the expression, “a come to Jesus meeting.” This is a come to Yahweh meeting!

Here’s how it goes down.  Moses says to the men of Israel: “For the Lord your God is God of gods and Lord of lords. The great God — mighty and awesome — shows no partiality and accepts no bribes.”

Moses is talking about His character. He goes on in verse 18-20: “He defends the cause of the fatherless and the widow, loving the alien, giving him food and water. And you are to love aliens, for you yourselves were aliens in Egypt. You must fear the Lord your God, and serve Him. Hold fast to Him, and take your oaths in His name.”

God, through His spokesman Moses, wanted there to be zero confusion about His person and character, His interest in others, and how we should see ourselves, who we need to love, and how we make commitments.

Have you ever had someone say: “Hey, there’s your son, he looks just like you.” People usually use that externally, but when they want to describe character, they say “Like father, like son.”

When we bear our Family resemblance inwardly and outwardly, what we see is a strong man who fights for freedom just as Jesus Christ fought for our freedom, for your freedom, all the way to the cross.

We also see a tender God who loves all captives. In Deuteronomy 10:18,  “He defends the cause of the fatherless, of the widow, and loves the alien, giving him food and clothing.”

We’ve seen a strong God who fights for freedom and a tender God who loves people who are captive.

Now if you’re Moses, you’re trying to get these guys’ conduct and character in order. What’s the most powerful thing that you can do?

You talk to them about their own deliverance in order to get them to become agents of justice and deliverance for other people.

In Deuteronomy 10:19, we are told “And you are to love those who are aliens, for you yourselves were aliens in Egypt.”

That was my Egypt. It was filled with escapades of vandalism. We lived in the Egypt of partying, and creating suffering in the name of fun. I’m so glad that God delivered me from my Egypt. Aren’t you glad?

God is going to motivate us in any way. He wants, to remind us all that we were aliens, we were alone, we were separated from God.

You were separated from His love, advice, counsel, Fatherhood, wisdom, and power.  He took you and transformed you from the domain of darkness to the Kingdom of Light.

As men, we have to grasp who our Father is so that we can become the sons He’s hoping for us to become, to bring His justice, compassion, health, and life into the world.

Why The Fascination With Superheroes? – Uprising Series III

You Can Have The Real Thing – The Fantasy Island Series II