This is the third in a series we are calling “Uprising,” where God’s men seek to reject the material world and embrace God’s world. What does the future hold for us? What does the Bible say about the future of God’s men? This article — and the others that follow — take us on a journey into the broken male culture, where the men of God need to seek revival in God’s words, God’s laws and God’s desires for us to submit to His will. This series will help you understand, through the lens of Scripture, what God expects from his sons. 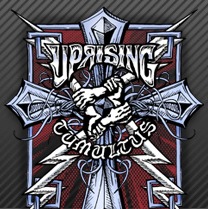 We are witnessing a variety of global uprisings, but there is something more: a spiritual uprising is uniting men around the world. Men everywhere are rejecting the broken male culture: seeking new hearts, seeking truth, seeking righteousness, seeking God.

God’s men want to be transformed. They are seeking the power of the Holy Spirit, through Jesus Christ. Our spiritual Dad loves us. He cares for us. He’s waiting for us. Now is the time to embrace Him, to love Him and to do His will!

But we need to be strong enough to go all the way to the cross with our Father. I’m not just talking about everybody in general. I’m talking specifically about you. This is our time: YOUR time, guys.

This is our time to transcend the cultural identity and say no to the broken patterns around us. This is our time to stand against injustice and gain personal inner security that allows us not just to be strong, but to aggressively love people.  That was Jesus. He went against the broken male culture and was crucified for it.

Are you ready to do that? It sparked a revolution then. It is sparking revolution now in countries around the world.

Before Jesus left this planet — the universe He created — the architect of the world portended many uprisings. He spoke to his men and directly to us in Acts 1:8 (NLT) with the following words:

“But you will receive power when the Holy Spirit comes upon you. And you will be my witness, telling people about me everywhere — in Jerusalem, throughout Judea, in Samaria, and to the ends of the earth.”

Jesus portended an uprising. He telegraphed what’s coming. When he was talking to his disciples, he said: “power is going to come, it’s going to fill and form you, and there is going to be an explosion so gigantic it’s going to look like concentric circles from Judea, Jerusalem, to Samaria, to the whole world. If you are a Christian right now, listening to my voice, then you’re a part of that initial explosion.

Let’s look at Acts 2:21 which says, “Everyone who calls on the name of the Lord will be saved.” Peter says this is what God is talking about. It’s happening right now.

An uprising has launched. These men go from being individuals to being one. You see new courage, instead of hiding from their culture. They are now out in the open. You see a new explosion of testimony and talking and witnessing versus clamming up and not talking about Jesus.

Then you see the target audience, in verse 22: “Men of Israel, listen!”

How was this uprising going to happen? Who was the group he had to target? Who would create the most phenomenal witness?  It wasn’t the women of Israel, as valuable as they were. It was the men of Israel. Men have their own role in God’s culture.

We’ve seen the results of the absence of men, but that tide is turning.  God is filling and informing men with His Spirit through belief in Jesus Christ who began then and continues now to turn broken male culture right on its head.

An uprising is forming today; a spiritual uprising of men is on the increase. God’s men. Men just like you. Join Every Man Ministries. The time is now.