May 6, 2013 | Featured | Kenny Luck The Spiritual Pathway For Men – Get In and Get Healthy

This is the second in a three-part series called “Sleeping Giant” on the state of men in our culture, and the spiritual pathway that changes everything: the man, his family, his church, his community, and the world.

In the last article, we established that for men, inspiration without progression is stagnation.

A vision that resonates with men is required if you desire to truly engage them within a church.  If there is a strong vision, a defined process that helps a man realize it, and outcomes that make men stakeholders in the ongoing success of the church’s mission:  men long for that kind of significance, and they start showing up in big numbers.

The Sleeping Giant model and process provides answers to men’s critical questions and bridges men from inspiration firmly over to the progression of spiritual development by calling men in the congregation and in the community to:

This is the Sleeping Giant Spiritual Pathway.   Let’s look at the first two steps.

Every man’s “gotta guy” they know who can help them fix their car or write their next home loan.  But most men don’t “gotta guy” that helps them win battles for spiritual and relational health.

The Sleeping Giant model emphasizes getting guys “IN” with other guys who share their personal commitment to become better men and grow spiritually. That could be a weekly men’s group.  It could be the men in your couples group meeting on a separate day of the week.  It could be some guys from work having coffee once a week.  It could be a meeting of men at church or at a conference that connects you to other men who seek God’s purposes for their lives and relationships.

Men become men in the company of other men.

Ask any warrior in any culture.  For God’s man, who wants to do life God’s way, connecting with other men is not optional.  When a man commits to pursuing and deepening his male friendships, he will sustain his momentum and achieve personal changes faster than he ever could by himself.

The next call after “GET IN” provides direction and meaning once guys get connected.  They will naturally want to know:  “What’s the process?”  For everyone’s sake, the next step in the Sleeping Giant process is for the man to: 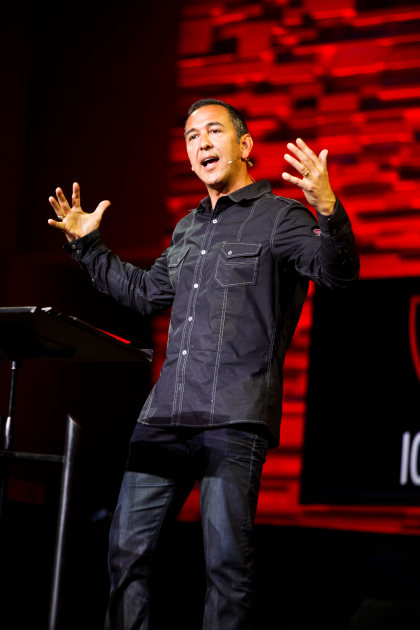 Step two of the process involves defining and meeting the felt needs of men, and helping them get a “win” that is meaningful to them.

Here’s a man fact: men are like icebergs in the sense that they only reveal the tip of who they are and what is happening in their lives.  Underneath the waterline of their lives are a host of issues that are producing enormous stress and pressure morally, relationally, maritally, professionally, and emotionally that define the true substance of their existence.

Ten years of testing and research show that if the most real and relevant issues remain unaddressed and untouched, the rest of what a man may learn or accomplish through his connection with other men will be short-lived in both the life and church contexts.

He will simply become a more knowledgeable road-side bomb waiting to go off later in the leader development process because of unaddressed character issues.

We thought we knew him right?  We thought because he had his act together on the outside that his inside (his character) was mature and well developed too.  But nobody ever asked, and the process of leader development allowed him to pole-vault over any close inspection of his character and core relationships.

In a group context and with group safety, men need to go after core health in their own character and relationships first.

This involves an open discussion of temptation and compromise (moral health), his view of women and marriage (marital health), his leadership in the home (family health) and how masculine friendship and accountability work (relational health).

True health in these core areas is the difference between an authentic versus a synthetic leader.  More importantly, the Bible requires core health and strong leadership in these categories prior to selection for church leadership (See 1 Timothy 3:1-5 for the requirements for deacons and elders).

GET IN and GET HEALTHY are powerfully connected parts of the process for the man, his group, and for the church.

Once a church has defined and met the felt needs of a man, the transformational capital earned by the church in that man’s life needs to be spent on leadership development and the call for that man to GET STRONG and GET GOING, which we’ll dive more deeply into in our next article.

Watch the Sleeping Giant series where men’s expert and pastor Kenny Luck helps you understand ground zero for the church: the full power and promise that rests in the hands of its men. The Scripture shows that God’s men are central, responsible, and accountable to their Creator for their moment in time. WE are the men of the church and it is OUR TIME.

Dig in deeper yourself with the book, or get some to pass along to the guys who just came to mind: Sleeping Giant.

Where Are The Men? The Dream of Every Pastor…