This is the first of four articles in our “Uprising –Series III,” where God’s men explore the “uprising” taking place globally where a rebellion is taking place against the suffering created by broken masculinity. This series takes us on a journey into our broken male culture, showing us that God is our Father and He wants us to return home to His family. This series will help you understand that we are all God’s children and — like any loving Father — He expects His sons to behave accordingly.

When you think back on your life, how many of you had visions of being a superhero who brought justice?

I know that 90 percent of you had some form of superhero paraphernalia: underwear, pajamas, a cape, masks or a Halloween costume. There is something in us at a very young age that wants to be a few things: we want to be good, we want to be dangerous, we want to have special power, and we want to deliver justice. 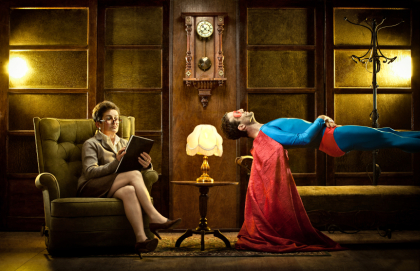 We want to be on the right side of good, but then as we age our vision goes from the ideal to what is really born into us, to something else, usually because we’re subjected to life here on Earth. There are losses. We get hurt.

The idea fades away because it’s just an idea. It’s unrealistic; you can’t run around doing good in tights and with all this equipment. It’s just not reality. We can’t be that, and yet, a part of us longs for that.

How do I know that?

Because we see Iron Man, Tombstone, Gladiator, all these movies, where strong guys deliver justice, have that something extra special power, and lead movements. They protect the innocent. They stand for something. We pour billions of dollars into movies because that is really who we want to be, but we can’t be in our everyday lives, so we settle for the fantasy over reality.

It’s a tragedy because our world is ready to receive a real guy who is good, dangerous with goodness, who brings justice, and who champions the have-nots and the beaten down. You CAN be that man.

Look at world events.  Look at what happened in Tunisia.   You can see how one man released a flash point [S1] that unleashed an uprising. All of a sudden, there’s this domino effect, not just literally or politically, but emotionally.

A Tunisian street vendor set himself ablaze after a policewoman confiscated his fruit cart. Not satisfied with accepting the fine that the vendor tried to pay, the policewoman slapped the vendor, spat in his face and insulted his dead father.

This was the flash point of an uprising.  The fruit vender not only set himself on fire, he set Tunisia on fire and it spread throughout North Africa and the Middle East.

The country of Tunisia heard about this one man who committed suicide because he was depressed and frustrated over his livelihood being taken away by a broken political structure run by men. That was the flash point.

Every uprising has a flash point.

They could not believe what just one man, just one act of uprising, unleashed on the Arab world, where authoritarian and monarchal governments have been changed forever, and many are shaking in their boots.

All it took was one man in an act of desperation to unleash a flash point that tapped into this pent-up emotion and created an uprising.

As we’re in this Uprising series, you will pick up on and read about movements like this. You will see that they hinge on very small things.

British Baptist preacher Charles Spurgeon said that big wheels turn by small axels. The small axel of this one man’s suicide has turned this big wheel of uprising throughout the Middle East. Egypt, Iran, Jordan, Kuwait, Saudi Arabia and Syria all of these governments are going: “Oh my goodness.”

There is a grass-roots freedom movement in the world.  It’s not a politically motivated movement. It’s not the Islamic political group Hezbollah. It’s not some insurrection, or a terrorist-sponsored thing.

There is something happening in the world that has been simmering for centuries. It is about broken male culture and its partnership with evil. The chief export of this culture has been the creation of suffering worldwide.

You can see it everywhere in cultures that do not evolve; cultures that do not take on a dignified respect for human life. They create this kind of gender-class system that produces suffering. It’s really nothing new. It has been simmering, and now it has reached its flash point.

Cultures around the world are saying, “We are done with this broken male dominated culture because it produces so much suffering.”

What has been the result?

The symptoms: domestic violence, broken homes, prostitution, human slavery, honor killings — all these are manifestations, but they are not the root cause.

There is a worldwide reaction. What do people want?

They want freedom. They want to be liberated from this culture of men that doesn’t allow them to be who God created them to be.

Those who have reacted want relief. They need relief, but deeper than that, what they want is a brand new man.

They want a brand of men that protects and provides, but that also loves and defends the vulnerable, the marginalized, and people who need a champion. They want men who bring justice.

We saw the flash point of Jesus’ death which created an uprising like this in the Bible, where guys became dangerous with goodness, and went counterculture. We saw it in the men of Pentecost, in Acts 2.

You have a Father who has character. He wants to pass that down to you. He wants to train you so your conduct can change culture.

That’s what every father’s dream is, isn’t it?  He wants for his sons to grow up to be the superheroes he knows they can be.

You Can Have The Real Thing – The Fantasy Island Series II

Wake Up The Sleeping Giant – The Uprising Series II

Men Are Built For Intimacy – The Fantasy Island Series II