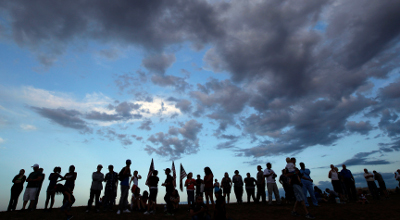 Blazes and bullets. Both make us very afraid and vulnerable. Ask Colorado. The epic and emotionally sapping one-two punch of late has a state’s knees buckling and its psychologists and churches buzzing with activity as its people search for meaning in the midst.

Without permission, a 10-ton bomb of unpredictable and uncontrollable reality has been dropped on this poor state just when the half-life of it’s last epic tragedy (Columbine) seemed to be expiring, getting boxed up and safely stored away in the garage of its history.

Unlike Bronco fans mourning Tim Tebow shipping out for New York, these recent losses exact emotional flesh and spawn a tsunami of national discussions over issues we don’t like to cover—issues connected to good and evil, emotional and spiritual realities, the culture, and our national character.

Unfortunately, the public discussion usually devolves into the politics surrounding the event of pain instead of dealing with the deeper meanings and deeper contexts. In this case, the discussion will gravitate toward gun control and never touch “guy” control. Our media community is so predictable.

Everyone wants the “why” behind what happened, which accelerates the news cycle light speed. A tragic natural or human disaster unfolds, then spirals at Mach 3 thru the major news outlets, web channels and social media universes, landing uninvited on the moral, philosophical and cultural porches of a billion brains on a daily basis to process, discuss and debate. Like you, I am searching for meaning and context to help me with the “why.”

One thing’s for sure: The problem and pain brought on by James Holmes, the suspect in Friday’s shooting massacre, does not exist at the level at which it is eventually seen. It exists at a deeper level, a driving level, and a formative level that was baking into a man’s character, which was destined to explode onto others eventually.

If you don’t believe me, believe the time and energy investigators are spending on the topic of “motive.” They want to know what was happening on the inside of a man over time that led to the devastating blast zone on the outside.

Specifically, what made this guy see himself, the world and others the way he saw them? What type of identity produces this kind of energy and expression that so easily causes suffering? What makes a monster like this? Hopefully the authorities get to the bottom of it so we can have some context. But solve that riddle and then what? Do we write it up in the APA Journal under “sociopathic tendencies?” Or, do we dare take what we find and work it back into all levels of suffering caused by broken male culture and conduct?

Not many will take on this behemoth. Too complicated sociologically or too moralistic, they say. But those who truly care about justice and care about suffering will search for those identities that produce healthy energies and expressions that produce less suffering. In fact, any organization that can become a center of masculine transformation will not only be extremely relevant but very appreciated—especially by those in the blast zone of unhealthy men.

For the short term, it appears that the news cycle will remain largely the same. A consistent and constant wildfire of broken and poorly formed “wild” men and their escapades. Cynicism, that subconscious and invisible byproduct of the negative male news cycle, will also remain strong among those who are evaluating all of us guys.

From Tiger Woods to Jerry Sandusky to Anthony Weiner to John Edwards to lascivious clergymen, the caricature of men has tons of fuel. Yes, I just made a very strong generalization but a very provable one.

No man plans to be an adulterer, a lamentable adult, predator or deadbeat dad, but somewhere along the way all these men were “formed” in the presence or absence of mentors, models and messages. This is the level at which the real problem exists before we experience and see it.

The good news is that darkness provides a powerful context for hope and light. This black season of masculinity provides the perfect backdrop for a shining and strong new movement of men. Like diamonds sparkling on top of black velvet, healthy men will stand out. The only question is: Will we rally, will we accept the call and will we trade in broken male culture for a morally transcendent vision and version of masculinity that speaks to our deepest needs for greatness and significance?

The last time the world saw this type of masculine wildfire powered by men filled and formed with a new identity, energy and expression, the men became known as Christians and the cornerstones of western civilization were laid.