Holiday cheer can be hard to muster when there’s chaos in the air; with more tasks and less time, ‘tis the season that puts a squeeze on our emotions, priorities and finances. Some men paint on a grin and roll through the routine with low expectations. Others face demons from the past, broken families, pressures and circumstances that bring up pain. For many, it’s not survival of the fittest; it’s just a matter of survival. 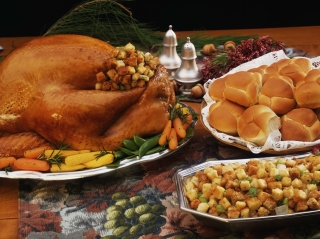 Holidays can be so much more. Allow me to tweak your perspective this year, starting with T-Day.

Typically, we go into Thanksgiving with hunger in mind, an appetite for turkey, stuffing, all the fix-ins and a football game, all in the name of gratefulness — just like the pilgrims celebrated the harvest, right?

Wrong. Did you know Thanksgiving was the original men’s “meat-up” dinner that started with a prayer? Thanksgiving was actually evangelism in action, introducing other men — in the Pilgrim’s case, Native Americans — to God. It was a gathering of men to thank God for the harvest. Not just a time to be thankful. It was a time to address the person behind the provision, not randomly recite positive thoughts.

The Pilgrim’s purpose for leaving England in 1620 was to find a new world where they could worship God freely and govern themselves. After arriving, the Pilgrims signed the “Mayflower Compact” in December, outlining America’s first document of civil and religious freedom. After a prayer service, they began settling in. Faced with hardships like starvation, sickness and a harsh New England winter, they persevered through prayer and with the help of Indians.

The following summer, the survivors reaped a harvest, and declared a three-day feast to thank God. And they invited the Indians to celebrate with them.

Pilgrim Edward Winslow wrote about the first Thanksgiving saying, “By the goodness of God, we are…far from want.”

Fast-forward to 1789, following a proclamation issued by President George Washington, America celebrated its first Day of “Thanksgiving to God” under its new constitution.

In 1863, President Lincoln set aside the last Thursday of November as a national Day of Thanksgiving. But for Lincoln, it marked a celebration of his freedom from sin. In July earlier that year, while walking among the graves of Gettysburg, and suffering from his son’s death, he realized the need for a savior and committed his life to Christ.

Is it coincidence, that on November 19, President Lincoln delivered perhaps the most revered speech of all time, the “Gettysburg Address,” injecting his newfound faith in God and the nation which brought the American Civil War to an end?

It seems the intent of our Thanksgiving national holiday is to acknowledge God, pray, be inspired to invite others and share a meal to reflect on the founding fathers great faith, courage and God’s provision. It’s a freedom we should not take lightly, and celebrate with integrity. Be filled with gratitude for what God has done. Not just gratitude for the sake of gratitude.

Maybe we should be more like our forefathers, who survived hard times with prayer, and were filled with Thanksgiving that overflowed with welcoming strangers to share a meal and prayer.

This Thanksgiving, I challenge you to celebrate with the original intent of our founding fathers. Invite some unbelievers over, cook up some meat, start with a prayer, and lead a conversation about the true meaning of Thanksgiving.