Imagine being 6’ 5” and more than 300 pounds, a human tractor capable of plowing holes up the middle for football running backs and protecting quarterbacks from agile defensive lineman. Now imagine being educated at Stanford. A man with brains and brawn.

At a glance, a man of this stature could never become the target of harassment and bullied to the point of depression and resignation. Yet, Jonathan Martin, an NFL offensive lineman for the Miami Dolphins recently walked out of the locker-room, and perhaps his football career, because of the treatment that afflicted him at the hand of his fellow teammates. I’m glad he did and put bullying into the spotlight because bullying is not just for kids and it’s costing people their lives. 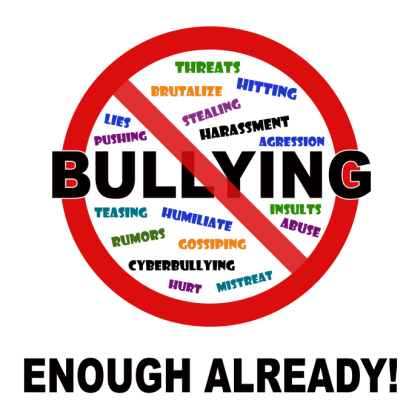 After reading this brief blog, I hope you and other God’s men will be able to identify bullying at home, school, and at work, and be able to apply some Godly muscle to all parties involved.

I read a recent article about several college-age women who were bullied to death, shamed into suicide after classmates posted illicit photos on social media sites while they were drunk, drugged or both. Young men, disconnected from empathy, abusing unsuspecting women and getting away with it, while the victims try to survive the torment from peers. It’s sad, but after learning more about bullying, I believe it’s more pervasive than these top news stories.

Bullying starts with gossip, “joking around,” sarcastic comments that escalate into verbal and physical threats, aggression and violent behaviors. Bullying is defined as a form of harassment, purposeful attempt to control another with physical or verbal abuse.

One report said bullying is the most common type of violence in contemporary society. Here are some startling statistics:

What can God’s men do about bullying?

The other day, while taking my daughter and friends home from school, I heard them chatting about other girls at school, not at all flattering. One of the friends stayed silent. Recognizing the gossiping poison, I had to say something, “I’ll bet it’s really hard being a girl at your school.” The silent friend spoke up sheepishly, “Yes, it is.”

Merely identifying this fact brought the conversations to a close.

And, if unkind words escalate into abusive behaviors that control you or someone else, the compassionate thing to do is report the bully to authorities.

Jesus showed us how to deal with a bully when he was harassed in the desert by Satan. He used scripture to defend himself. We need to know the word, and apply it to the circumstances.

Why would someone bully another? What are they thinking? Feeling?

I believe bullies aren’t thinking, and aren’t feeling at all. Their behaviors are results from a broken male culture and broken families that leave children with low self-esteem, self-hatred and jealous natures. Studies show bullies are often abused as children who experienced social rejection by their fathers.

If they only knew, we all have the most perfect, loving Father in heaven. I hope this message can break through the bullying barriers. But it requires a God’s man to show up in society.

Kenny Luck, founder and president of Every Man Ministries, is the men’s pastor at Saddleback Church, and has a great deal of experience in leading men through their walk with God. His program Sleeping Giant empowers men to take the experience of a men’s ministry and bring it to their own communities. Watch Kenny’s teachings at EveryManMinistries.com and start your men’s ministry today.